For updating, disable and delete the previous version, and install the new downloaded one. Or just unpack the zip you get from the download and overwrite the previous folder from wp-content/plugins/ via FTP ( recommended because this way you won’t lose your generated waveforms )

How do you enable comments?

You have to enable comments and select the skin wave from the Player Configuration menu.

Now there is an included default configuration just for that, it’s called skinwavewithcomments 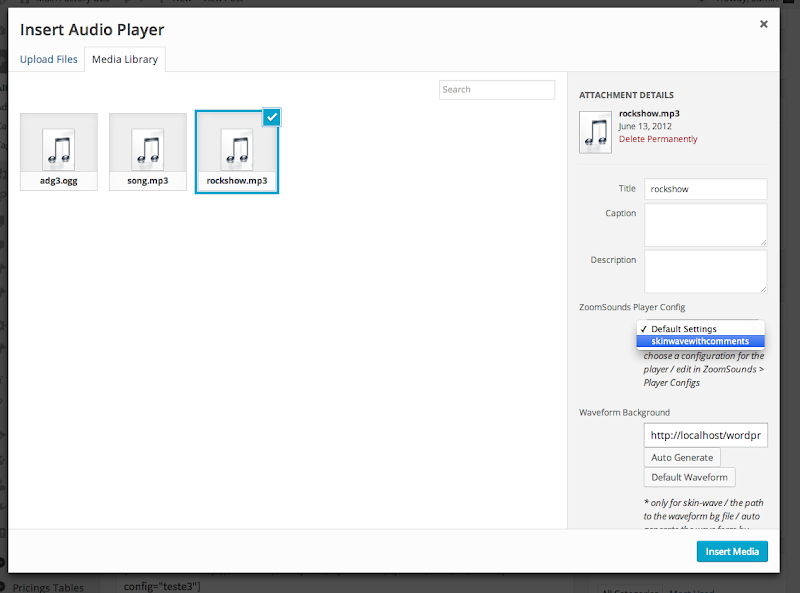 When you insert a new player, just select that and you have comments enabled

How to insert Song Name in the gallery item ? 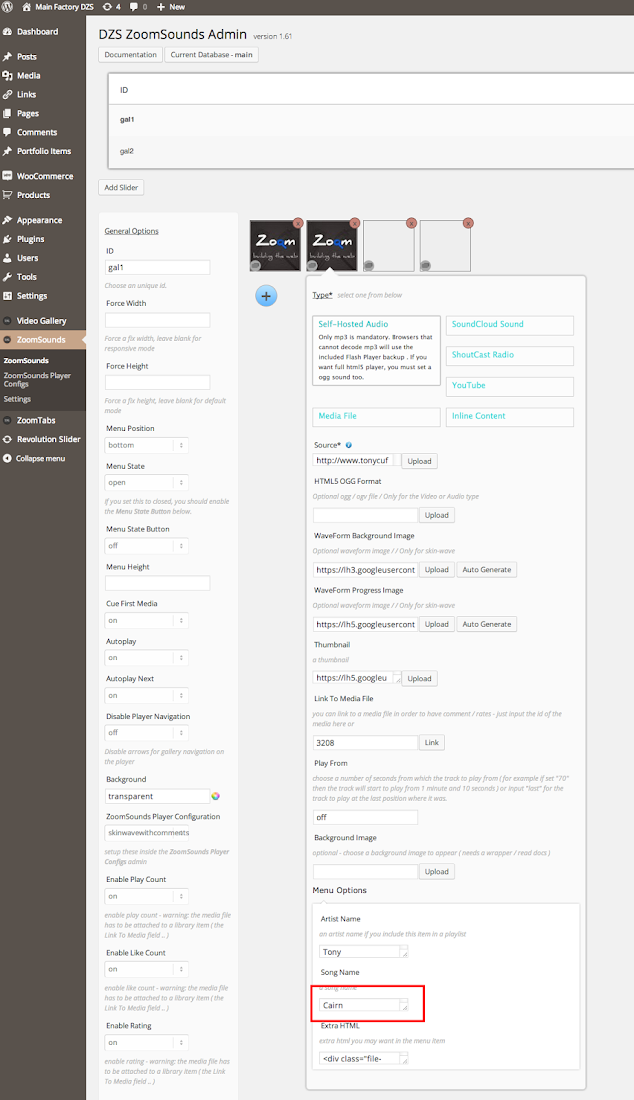 Do I have to create a gallery for every song if I’m trying to load individual songs to individual blog posts? Seems like I’m missing the shortcode for the single player vs. the play list gallery.

If you want a gallery – you can press the other button. And galleries are configured inside the ZoomSounds wp menu.

Can there be multiple instances of this player per page

Yes, there can be unlimited instances on each page / post.

Sure, when another ZoomSounds player is clicked, the current playing one will be stopped.

Hi, Can i use it as standalone script without wordpress?

This is stand alone version – http://codecanyon.net/item/zoomsounds-neat-html5-audio-player/4525354

I’d like to have playlists from soundcloud, say like an EP but have multiple EPs on one page; is this possible? Will two instances play at the same time? Or could one pause?

At the moment, it’s not integrated with the soundcloud api to retrieve a user playlist. You can create your own playlist and add whihc soundcloud sounds you want.

Default is that only one zoomsounds player on the page plays. The other ones pause.

Also can it play MP3’s self-hosted?

Sure, it’s the main source. It can also play soundcloud, shoutcast radio…

And another idea would be a buy link for the EP! Could it be possible?

You can insert that in the artist or song name spaces

SoundCloud sounds do not work

Try to chmod this file 755 from your Filezilla or FTP app.

If it does not work please contact your host and ask them to allow access for this file – plugins/dzs-zoomsounds/soundcloudretriever.php

Ultimate DJ Manager is a “Must-Have” wordpress plugin for DJs and producers. The plugin comes…

The UPS Shipping Method plugin for WooCommerce will get real-time rates from UPS. The plugin…